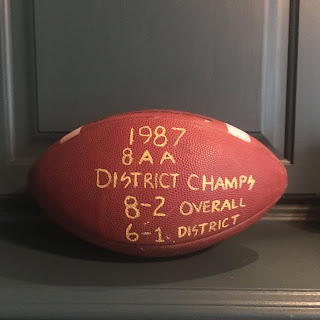 Every year when the fall starts to peek in and the pigskin is getting tossed around, I can't help but think of my childhood days and Lutcher football.  I remember going to lift weights in their summer program when I was a wee kid.  The weight room was under the stadium and the bar weighed 45 lbs. and I could barely lift it.  There was a jumping machine too. I did it with passion because I wanted to jump high like Ta Ta Jones.

We would always go to the summer camp where NFL local stand out, Lionel Washington, would be there.  The program was in its prime and about to go 14-0 in the 1983 season.  Things felt great around there and I couldn't wait til I was old enough to run out of the Dogs Den to play.

I was always drawn to one of the assistant coaches there named Coach Tim.  He was young and full of energy and really paid attention to details even if you were only a kid.  There was just something about him that I connected with.  He coached my brother in baseball and seemed to be the heir to the throne on campus.  I couldn't wait to pitch in a Dogs uniform in that baseball stadium but I was about to get my first lesson in letting go and going off into the unknown.

Coach Tim was hired at St. Charles Catholic as it's next head coach.  I couldn't believe he left.  St. Charles had no tradition going but he went anyway.  I played my freshmen year at Lutcher and had the nerve to wear Terrence Jones' #10.  We didn't win a game and no one seemed to care much.  I guess we were just the Freshmen team.  Wilburt Ursin was my age and he started at QB as a freshmen, so my dream of playing QB on that field was coming to an end. 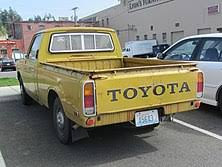 I went to see Coach Tim in his office in Laplace.  His little yellow Toyota truck was parked outside and there was no locker room and his office was a 10 x10 building.  This was no Dogs Den.  We talked about his plans to build a locker room and he was going to call it The Cometplex.  None of it mattered though, I believed in him and his ability to build something paying close attention to the details.  He looked at me as if I could do it if I worked hard enough.  He said I'd be treated like everyone else and I'd have to work for the job.

My mom dropped me off in front of the school the first day of class after Christmas break with tears in her eyes.   There were Corvettes and other nice cars in the parking lot and I was excited to be going to school closer to the city.  My dad would have to work a lot of overtime to afford sending me there but he was very supportive of my move.  Leaving Lutcher was like leaving Jesus.  People looked at me like I was Judas or something.  But I had curiosities starting to pull at me and I knew despite all the names I was being called that this was the right decision for me.

My first year starting we lost the first game to Peyton Manning's Newman. We were underdogs every game but then we went on a tear.  We beat Riverside 14-0 in the first inaugural game.  I scrambled for two touchdowns weighing in at about 145 lbs.  It was the only game my late cousin Joey Poirrier would see me play and I floated passes all over the field just like he taught me as a kid.  Coach Tim would have me over every Sunday night for ice cream and film.  We would make a plan for the week before Monday's practice.  In our blue and gold uniforms that looked exactly like Lutcher, we went 10-3 and almost made it to the dome.

It wasn't long before each years team was expected to go undefeated but none would win the championship in Coach Tim's tenure at SCC.  But that didn't stop "Carrot" Shexnayder in his big diesel truck from coming to seduce Coach back to Lutcher.  They had seen enough and wanted their brand of football back.

So I didn't play football at Lutcher but I was fortunate enough to get infected by its fever and play under someone from the system I loved.  Coach Tim started under Frank Monica who started under the man who told me "I Can I Can I Can", Mr. Norman Buckner.  When I hear the SCC chant, "hey hey hey SCC", I think of Coach Tim in his little yellow Toyota truck and his wild visions and how we rolled in 1987.  Miss Fuselier's voice in the stands was pure joy.  We were pioneers. 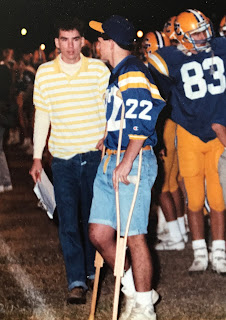