One Dead In The Attic 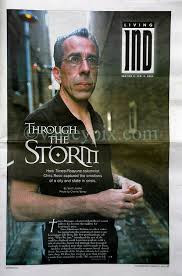 The year was 2005 and I had moved back to Louisiana yet again after my 2 year relationship with Atlantic Records came to an end.  The first time I moved back home was after 911 to find a studio space.  I was tired from three years of work on my first record "So Long" and was a little freaked out after watching buildings fall and being scared of anyone with a back pack on the subways.  But now in 2005, it was August and it was hot.  Close to a year had passed since I toured constantly playing festivals and trying to remain out of the spotlight somehow.  I was recording everyday in my studio in Gramercy, Louisiana just off of the river, usually into the wee hours of the morning.

One morning I woke up and headed to the grocery store to pick up some milk when I noticed huge lines at the gas station and that's how i learned a storm was coming.  I'm sure I did what I always do, get some essentials and hunker down for the night and make music until I lose electricity.

The next day there were lots of people stranded from their homes because they left at the last minute when they realized New Orleans was going to receive the worst of it.  My cousin and I turned a community center into a shelter for about 150 people and then the rest of the Parish trickled in to help out.  No one had electricity or TV and all we could hear was rumors that New Orleans was done.  The oak trees were under water and the city was destroyed and not coming back.  It was quite a pill to swallow as I played nightwatchman at the community center.  There was a lot of stress as many different races were in the same room night after night saying good night to each other.  I was peacemaker and comforter in those delicate hours right before bed.

It was easy being there for people and being strong for them but the late nights alone were eating away at me.  Those stories in the Times Picayune every morning would stick with me.  I didn't know Chris Rose personally, but had read his work for years and now he was painting the craziest pictures ever.  I moved back home because of the culture.  I had been all over the country and nothing was like South Louisiana or New Orleans.  And now it was part of the gulf, to be long forgotten.  I tried to imagine being alone in a New Orleans house all boarded up with the sounds of guns going off just outside.  I could not imagine the horror that Chris was going through and was not surprised to hear years later that those writings became a best seller.

Last year, I was asked to sing a few songs for PORT-New Orleans 10 year anniversary celebrating New Orleans' comeback.  I was excited to play on this night.  I had plenty of material for such feelings.  I lived through many family tragedy's, 911, Katrina and was a wolf waiting for his time to howl.  I knew Chris Rose was going to be there and in the back of my mind was a little concerned but let it go and howled nice and loud through the roofless building at the moon.  When he got up to the mic after me, he looked at me and said, "who the hell are you, and why don't I know you?"  It made me feel good to see the look on his face.  I knew my words and music were received and in that moment I felt value as a musician for the first time in New Orleans.

Over the past year, Chris has come to a few shows and has become a big supporter of what I'm doing as I reenter the music business on my own terms.  I've been on his radio show several times and we just started doing duo shows where he reads from his writings and I set the mood with soundscapes and songs in between.  This has proven to be a good fit for my music and am fortunate to have found such a venue to sing in. 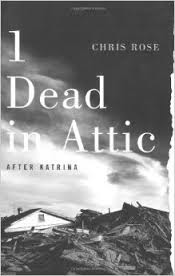 "I want that Dustan vibe!  That one of kind, dirt low down echo chamber of howling rage and joyous rapture; that incandescent sunburst of melody, hope and rage, that organic acoustic interpretation of original sin and saving grace, that thing you do so well."  -Chris Rose 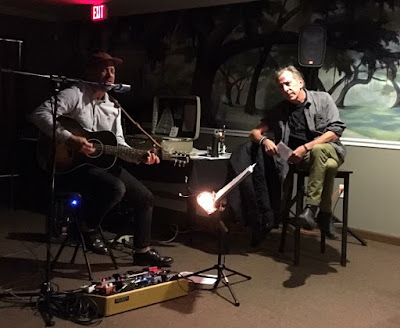