The Making of So Long 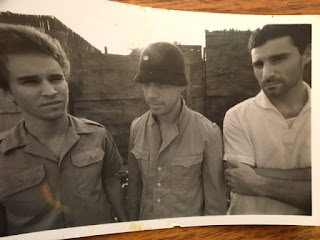 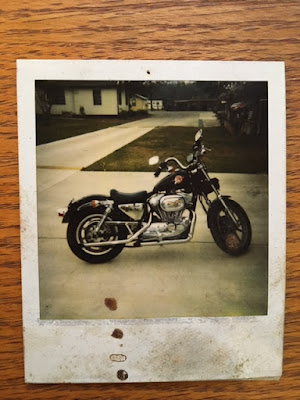 I remember in the mid 90's graduating college and being obsessed with getting my first street bike.  I had always had dirt bikes when I was a kid and couldn't wait to get my little Sportster.  I loved the freedom of the road and being alone on the weekends.  I had a good job, a nice apartment in New Orleans and was living the single life.  I think it took about 6 months to wear off on me.  I knew this life wasn't going to be for me.  I began to read a lot and research things and started saving my money.  I sold my bike and and my grand piano and starting setting my eyes on acting school in NY.  I was getting jobs as an actor and didn't have a clue what I was doing, so I faked my way into Stella Adler Conservatory and was on my way. 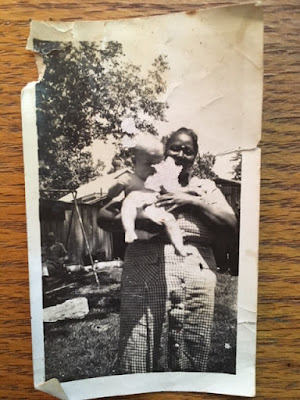 I remember taking this photo with me.  It's my mom (baby) and Jerry, who was my grandmothers cook and house keeper.  We were like family and I knew her grand kids and such.  Of course I never realized the complexity of the situation as a kid.  The picture always reminded me of my grand mother and her selfless ways and the things she did in the community. 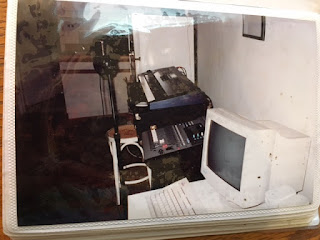 After a year of acting school, they cut our class of 32 students down to 16 for the second year and before summer I had a meeting with Tom Openheim the director and he said we love you and want you to come back for year two but you have to put your music aside.  I had all summer to work on music ideas and explore options.
I convinced Donovan Guidry to move to the city from New Orleans and we lived together in a studio apartment for the summer.  I used to send him music ideas and record them on his home voice mail and when he got to the city we began to explore ideas.  One day he started beating on the coffee table and then next thing you know he started taking drum lessons.  He quickly realized he didn't want to be a drummer and then we got an MPC 2000 drum machine. 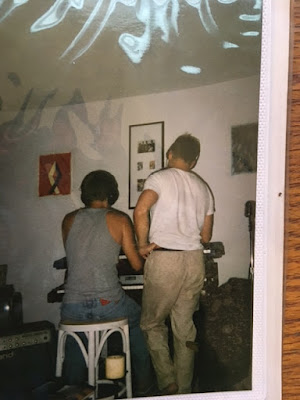 Seth Gold and I spent many days together before Donovan moved to the city.  Seth was an intellect and grew up with completely different experiences in Los Angles than what me and Donovan experienced and proved to balance us out just fine.  Seth was well read and was introducing me to books I'd never heard of and I began to devour them.  Between the two of us we found that we could write songs when we put our heads together.  Up until this point, I couldn't really write a song.  Seth was a very important part of So Long.

Donovan and I would stay up late nights brainstorming what elements we wanted to put together for making a record.  At the time I was using a four track and a sequencer.  I took a few classes at the New School.  One was a recording class and one was a piano class.  They introduced me to the recording software that was just hitting the market and I couldn't believe the options that were becoming available to home recordist.  I ran home and told the guys what was happening in the class and was really excited about the possibilities.  We had no interest in working with the studio guys and their tried and true ideas.  Though we didn't know that much, we didn't want to work with the pros.   Every time we tried, all they would do is tell us we couldn't do the things we wanted to try. 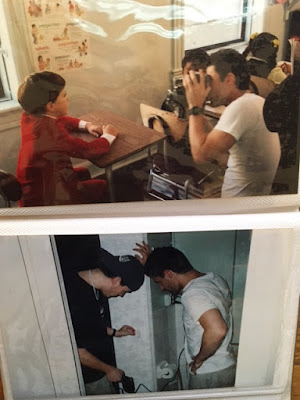 Donovan even took a film class at The New School and shot a video for the first version we did of the song Art.  I remember staying up all night trying to get a version of it done so we could shoot with it the next day.  In retrospect, it wasn't really necessary to have it completed but man was I possessed to get it done right.  Someone in Donovan's film class told him he was quite ambitious to make a red velvet suit for the kid in the video but that's just how we were.  Nothing was to be left unturned.  Everything would be done with care and even the stair well was going to be painted because I was planning on cooking gumbo for people who would be helping with the record.  I felt like everything was a representation of the record.  I was trying to communicate through every medium possible for the sound we were going after and if the lighting wasn't right, then we wouldn't achieve the sound.  Quite funny, but I had no musical language and everything counted. 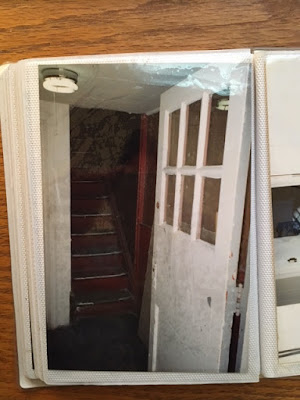 At the end of the summer, I decided that I'd indeed quit acting school to make a record.  It sounded crazy and didn't look right on paper either.  I remember calling my mom and telling her.  It had taken two years for them to see me as an actor and now I'm telling them I'm a musician.  I did feel ridiculous and small, especially walking into the east village music store where Lou Reed may drop in at anytime.  The guys that worked these stores were dicks and treated you like a tourist.  I bought a Rhodes keyboard and hauled it up 5 flights of stairs and just like that I had that Portishead sound I was after.

The door pictured above is from our apartment in Williamsburg.  We needed more space to work and live and we found something on the south side.  In those days everyone wanted to live a few blocks off of the Bedford stop on the train and the south side was a 15 block walk and it was dirty with a lot of old warehouses.  Josh and Moses, our Hasidic landlords showed us the place and it was pretty rugged but we thought we could fix it up. 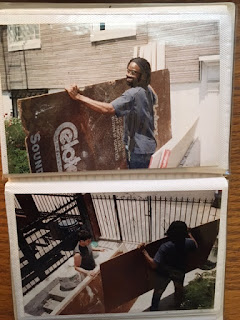 Kevin was really helpful and talented.  He was a music engineer and helped us build a soundproof room and he was my consultant with anything to do with recording. 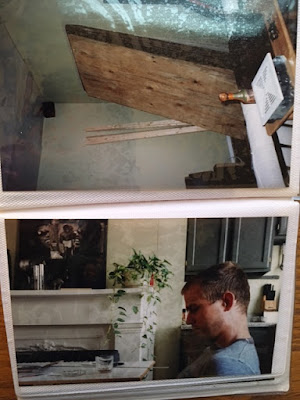 This is me exhausted in our freshly painted apartment.  It was probably the last picture of me with hair.  I was about to get really militant and disciplined.  It was going to take every ounce of discipline I had to learn all the things I had to learn to make something we could be proud of.  So I shaved my head as a way to make a hard change from the person I used to be.  I would have to shed my small town insecurities and be the New York artist I had been prepared to become. 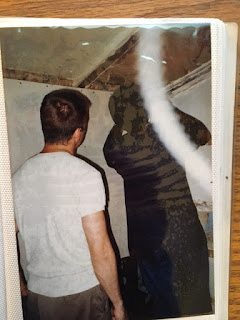 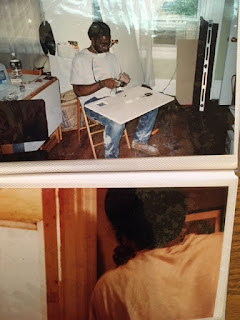 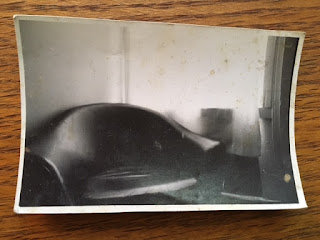 This chair was special.  I sat in it to write and listen to dub and trip hop records I liked.  I bought a lot of records in those days for research.  I was always trying to figure out how to make those sounds.  It was amazing when our first song was finished in the studio.  It was Perique and when I was riding home on the train at 2 in the morning I fell asleep and ended up in Queens.  I was so happy to finally be inside the vision we had had so much trouble trying to get to with limited knowledge.  Good & Evil studio was so key in helping us achieve that Cajun Dub/Trip Hop sound. 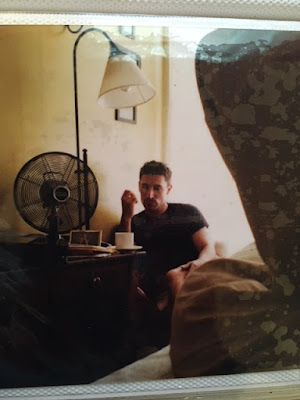 In these times, Donovan was waiting tables every night and he hated it.  Did I say he hated it?  I'd stay home every night in hopes of having a breakthrough musically.  One of my favorite things was waking him up the next day after a long night of inspired work.  We would allow ourselves about an hour of feeling good about it and then move on to more work.

Times were getting tough and Don was getting frustrated.  Two and half years passed and we were still working on the record.  One obstacle after another but man we were resilient.  I remember having an argument in this room and getting in each others face and his face was red and he looked at me and screamed, "I want to win"! 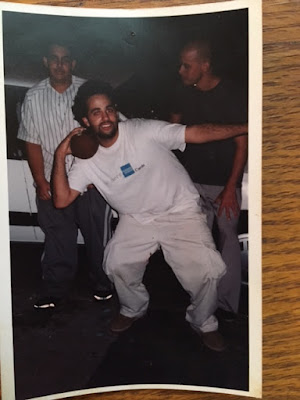 Sports played a big part for us.  It was a release to step onto the court and feel like something.  I enjoyed my time with the kids on the street.  Every few nights I'd write my cousin Patti who had lost her arms and legs to meningitis.  Many years after So Long, I felt like it was a heavy record and found my letters to her after she had died and forgot that she was a big part of my resilience.  So Long took so long.  It was a lesson I'll never forget.  I've never worked so hard for anything ever in my life.  I wanted to somehow pen all the feelings I had through all the family tragedies, and then 911 in NY.  I felt like a floating island with no home but this record anchored me in a way and prepared me for anything to come. 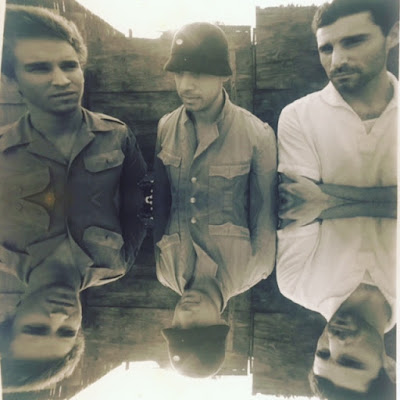